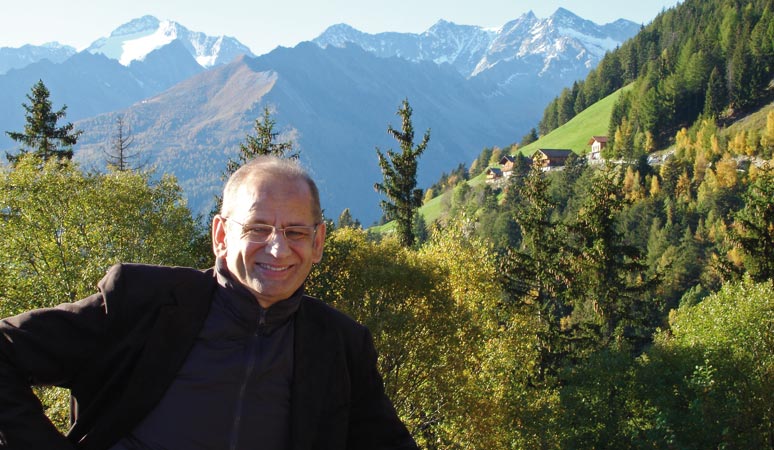 Move the world with your hands

Manpower – for Enrico Steger, inventor of manual zircon-milling technology and founder of the company ‘Zirkonzahn’, this phrase represents the unavoidable will, not only to promote ideas, but also to realize them with your own hands. Enrico Steger is convinced that, “The human being aims to spur improvements and trigger self motivation.” Also with manpower, Zirkonzahn transcribes the milling system, developed by Steger, which enables dental technicians to build high-quality constructions themselves. However, this system, with which a person still uses his/her own hands, was not secured with success from the beginning, competing in a now computer-controlled engineering world. At his first presentation tour through Central Europe in 2004, Steger brought his fear, “that people will be convulsed with laughter when seeing the manually operated system.” Enrico Steger chooses his own strategy: He focused on the end result, and then demonstrated all of the accomplishments of the Zirkonzahn milling system. The second part of his presentation was his self constructed device.

A successful strategy: Half a year later, after 700 people had already pre-registered, the development of the zircon-milling started taking course. “The People were enthusiastic about the result which the zircon-milling achieved”, described Enrico Steger. Today, the company Zirkonzahn sells its products in over 80 states. In the administrative office of the company, twelve languages are spoken and the folders are labelled with each country flag, from Great Britain’s “Union Jack” to the Star - Spangled Banner of the USA, as well as, the flags of Germany, Spain, Mexico, Korea, South Africa, and Australia.

The entire production and the head office of the company Zirkonzahn are still located in the inventor’s home country, in South Tyrol, the northern part of Italy which borders with Austria and Switzerland. Here is still the production of the zircon-milling system, the dust extractor, the furnace, and the dyeing liquids and also the sintering of the zirconium blanks is performed. The “Ahrntal”, a valley in the east of South Tyrol, is where Enrico Steger grew up as “the working-class family’s youngest son”. He learned the profession of a dental technician, “just the thing for me, because the mixture of creativity and handcraft fits my character.” Added to this is the ambition to develop, as well as the passion and vision “to move the world with your hands”.

Enrico Steger went abroad, worked in dental technician laboratories of different countries, quickly developed to a skilled technician and particularly learned in Germany, at the stronghold time of the dental technicians. In his mid twenties he came back to South Tyrol to build up his own laboratory. “In the basement is where I set up my first laboratory”, says Steger and amuses himself a little about this classical career start. The dental laboratory worked well but he was aiming for manpower, for translation of his ideas, which mostly had one aim in common: to ease this handcraft. At first he passed his suggestions on to companies, which advanced and converted his ideas. It followed with an invitation to give a lecture in Japan. Since this came with rise in recognition and enthusiasm, Steger was called to many other countries to give lectures and advanced training courses.

When the new, cost-intensive zirconium material and the equally expensive high-tech devices for its processing came on the market, Steger had a new idea in mind: Why not convert to a manually manufacturing process instead of CAD-technology using the strength of hands? Again, such an idea could have been sold to another company, however, this time Steger choose another way: “I deliberated with a friend of mine, whether I should sell my idea or manufacture and market the machine myself, which naturally comes with a lot of work” says Enrico Steger. His friend’s answer was determining for the foundation of the company Zirkonzahn in 2003: “You have to do it on your own, just alone for the adrenalin”. Enrico Steger moved back into the basement to start with the construction of the prototype – initially with a simple wooden model, which developed in a period of two years to a ready-for-sale machine. Thanks to Steger’s strategy to introduce the result for the first time on a presentation tour, and the fact that he had already made a name for himself with the former inventions and lecture tours, he generated a huge interest. However, the success was based on the zircon-milling system alone: It offers the dental technician simplicity in handling and cost efficiency. The zircon-milling system enables the production of both, simple and high complex constructions, which up until then ware impossible with any other system, for example, even the milling of fourteen-unit bridges. Finally, Steger’s fear that the system would not be accepted was proved wrong: The sales developed explosively and the company Zirkonzahn has moved out of the basement a long time.

The creative side of Enrico Steger makes sure that the standing idle is not an option at Zirkonzahn. His manpower pushes now the fourty people developer team in the whole world constantly to new improvements: Zirkonzahn developed its own zirconium-squeezer-method, fabricated its own quality improved drills and now awaits the coming out of new ideas from the implant sector. “I’m technically obsessed”, admits Enrico Steger, “absolute completion is for me when I can transform my ideas.” He still even takes part in product packaging design, the principal office decorations, and the company’s homepage. Steger is guided by his self ensured moods, trends, aesthetic and atmosphere. “If you transform your ideas authentically, you can be creative in many areas”, Steger is convinced of. From the beginning, he was lucky to find the sector in which he has been a bit better than the rest, and was able to develop from there. The financial success of the company Zirkonzahn, gives him the freedom to realize job-related ideas without having to make a profit. Thus, instead of luxury goods he rather buys new machines with which he can develop something new.

Simply just Manpower – the passion to move the world with your own hands.